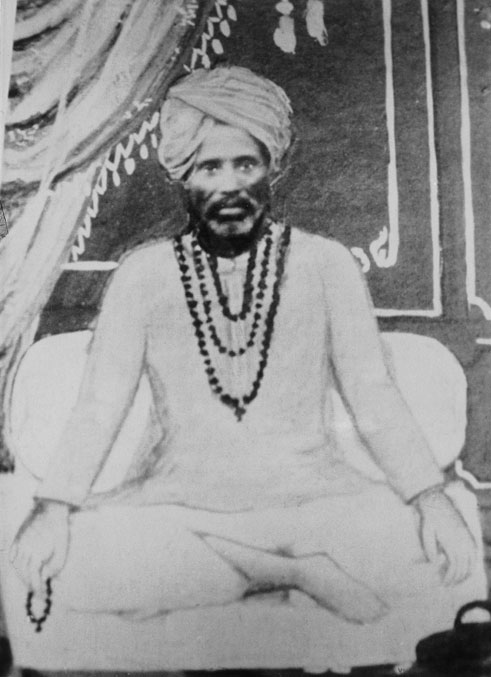 In the middle of the inaccessible mountain range of Sambu Panca Atala Akhara, there dwells the Omnipresent Supreme Brahman in the form of the hermit ascetic, Sri Alakh Puriji Maharaj[1]. Lord Shiva of Kailash[2] went to meet him at Badrinath-Dhama in the Himalayas. This meeting of both Divine manifestations was a blessing for the whole universe.

In order to rescue and liberate souls from the illusion of maya, Lord Shiva wished to embody himself in human form. Adhering to sacred law, he sought the consent of his Guru, Sri Alakh Puriji.

"Brahman himself you are, Lord of the Cosmos," Lord Shiva said to him. "I worship you as my Guru."

The great yogi blessed him.

"Shiva you are, the Supreme, Omniscient and all-powerful. From this day forth, you shall be known as Sri Devpuriji Maharaj."

Sri Devpuriji settled in the Abu Mountains of South Rajasthan, where he lived for some time in silence as a Sannyasi, unknown to those around him.

[1]Siddha-Dham or Siddha Dhuni is located between the towns of pilgrimage Kedarnath and Badrinath in the Himalayas. Sri Alakh Puriji stayed there from time to time with some disciples. He is one of the great rishis or siddhas of the satya loka, the supreme cosmic sphere of pure Truth and Reality. The real meaning of alakh is "indescribable." Sri Devpuriji is the personification of Lord Shiva, who is the liberator and destroyer of all evils. Shiva is consciousness, awareness, purity and fire. He protects his devotees.

Lord Shiva is the first exponent of yoga and he revealed this knowledge to Parvati, thereby bestowing a great gift on the whole world. The bhakta (devotee) who meditates on Lord Shiva obtains liberation in the shortest way, for Lord Shiva is the most kind and merciful of the three Divine Godheads. Brahma is the Creator, Vishnu the Preserver and Shiva (or Mahesh) is the Destroyer and Liberator. To most people these Divine principles are different aspects of the one Reality, Vishwa Deep, the One Universal Light, but in reality, all three are One.

[2]Kailash Mountain of the Himalayas (now under Chinese rule in Tibet) is the holy abode of Lord Shiva.

Next Chapter: The First Miracle