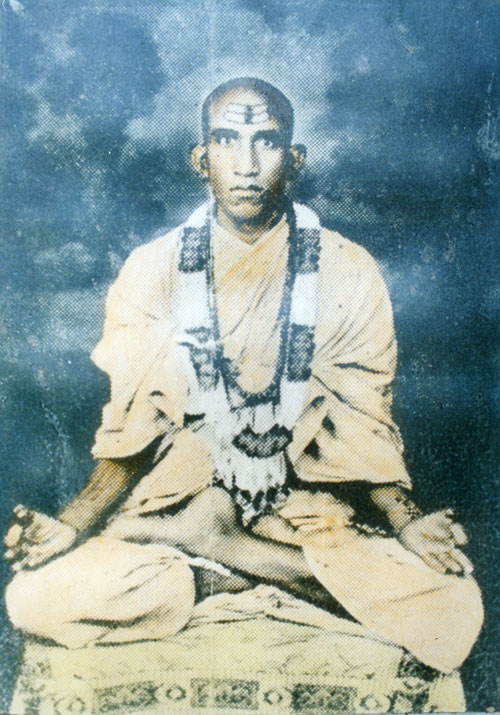 In Pava in the Nagaur district of Rajasthan there lived a spiritual and religious man named Sri Sunda Puriji from the Goswami family. Sri Sunda Puriji's son, named Lalananda, was the nephew of Mahaprabhuji. Even when very young he felt attracted to God and he used to meditate or seek satsangs to attend.

Perhaps it should be explained what a satsang was like in the days before people became as busy and preoccupied as they are today.

"Sat" means truth and "sang" means company. Satsang is the gathering of spiritual devotees to speak about truth, about God.

Mostly, satsang was celebrated in devotion to a personified God. Spiritual devotees would meet together in a temple, or ashram or private home and sing spiritual songs and bhajans. The leader of the satsang was either a swami, priest, or lay person who could interpret the songs or bhajans, line by line, revealing the essence of the poetic language and clearly explaining the meaning. Often the satsang went on all night and at sunrise there would be prayer and the distribution of prasad.

Unfortunately these joyful, all-night satsangs are now rare. In the towns or cities the people generally gather for about an hour, listen to records instead of singing, drink tea and then go home.

In former times, Indian village women would celebrate a wedding by singing for three or four long evenings without ever repeating a song. They may have been illiterate but they knew a great many things by heart. Today the town girls know nothing but a few pop songs. All over the world so much tradition is being lost and people know more about film stars than they do about the Saints and philosophers of their own country.

But when Lalananda was a boy there were neither movies nor radio and the satsangs he so happily attended lasted all night. There he would sit through the long hours, awake and alert the whole time, listening and absorbing all the wisdom.

A very good satsang was once given by the mahant[1] Dayal Puriji from Kharadiya, a monk of great holiness. It so happened that as Dayal Puriji was singing, the boy Lalanandji, who had been listening intently, slipped into samadhi[2] and he stayed in this state of consciousness during the whole celebration.

"Never have I experienced such a deep and continuous state of samadhi, nor have I ever seen it before. What a boy! He must have been a great Saint in a previous life."

The mahant decided to adopt Lalanandji and to train the boy to be his successor, as he felt sure that Lalanandji would eventually achieve the honoured office of mahaman­dalesh­war[3]. Mahant Dayal Puriji explained his plans to Lalanandji's parents and asked their permission to take him into the monastery.

The parents were religious and feeling extremely honoured, said, "Sir, if it is your wish you may take our child with you. We are all children of God, all brothers under the one father. May he learn well and accomplish all that you have planned for him."

So Mahant Dayal Puriji took Lalananda with him to the matha[4] of Kharadiya, where he educated the boy and looked after him with great love. He felt himself fortunate to have the pure, calm and contented child there. The child's happiness was infectious and the older man would feel its warmth whenever he looked at him.

When Lalananda grew up he succeeded Dayal Puriji as head of the matha and, as the elder mahant had predicted, he attained the respected office of mahamandaleshwar.

Lalanandji conscientiously carried out his daily duties but found that they did not completely satisfy him, he lacked inner contentment. His heart was constantly occupied with the need to find a Guru, a Self-realized Master. Eventually he went to visit Bhagwan Sri Deep Narayan Mahaprabhuji. Lalananda went many times to Mahaprabhuji’s ashram, where Gurudeva's words began to fill that empty place in his heart.

One day he put his trust completely in Mahaprabhuji's guidance.

"Lord, I am filled with a great longing to have your Divine Light illuminate me. Please inspire my heart."

"It shall be so," Mahaprabhuji replied. "You will be initiated on the occasion of Gurupurnima. On that day you will realize your True Self."

On Gurupurnima, the day of the full moon at the end of June or the beginning of July (according to the Western calendar), Lalanandji arrived at the ashram at daybreak and reverently greeted Mahaprabhuji with a prayer:

O Divine Protector, Mahaprabhu Deep,
this is my prayer to you!
Lead me across the ocean of Maya and liberate me
From the bonds of the world.

King Janaka, Shukra, Vashista and many other Saints
realized you.

The four Vedas, the eighteen Puranas and all other holy scriptures
Praise the grace of the Guru.

Omniscient One, you are unchangeable love,
You are the origin, you are present in the whole universe,
You are in all beings, the sun, moon and stars,
You lead your devotees to true Dharma,
You are the manifested Brahman, the Lord of my heart,
Lalananda says, I am your devotee,
Blessed is the ground beneath your feet.

My Guru and Master, source of bliss,
Origin of the world,
Eternal joy, radiating Divine blessing
I take my shelter in you,
You are the liberator, it is you alone who acts,
At one time you are both Shiva and the creator of the universe,
The sustainer of all things and the destroyer of all that is offensive,
You are God.

Even the Vedas are unable to describe you in words,
To you, the Preserver, Protector and Rescuer of the whole world
I dedicate my body, mind and property,
Lalananda asks you,
O Mahaprabhuji, Divine Light, let me be near you!

Mahaprabhuji smiled on him favourably and in blessing placed his hand on Lalanandji's head. The Divine power of Gurudeva filled Lalanandji's heart and he knew enlightenment. He became one with all and this state never left him again. Day and night Lalanandji burned with the pure flame of Divine joy in Gurudeva's presence. He had reached the state of vairagya — total consciousness of God.

This was the sign of Guru kripa, the grace of the Guru. Through a single glance of a Divine Master like Mahaprabhuji the disciple attains Self-realization, but there is also need of a pure and completely surrendered disciple, who takes the Guru's blessing deep into his heart.

Could an ordinary person begin to understand what his being had become? Lalananda sang this song:

You do not know my state of mind —
The Satguru's arrow pierced me,
I flew with it to eternity,
He met me and my tears ran,
Each fibre in me vibrates, as I am filled
With the Light of Reality,
This sweet vexation of the heart is known only to
the Saints,
I fainted, fell to the ground and my heart burst open.

Neither doctor nor judge knows this pain,
Only those with similar wounds can share it,
I found the perfect Master, Lord Mahaprabhu Deep,
He reshaped the world of my consciousness,
The arrow of his word, that wound made my mind
Lofty and free.

Lalananda says, all his worries have flown away,
His life shines as clear as the sunrise.

Lalanandji has also left us a poem about the grace of his Master's mercy.

I found the treasure of the Atma,
My Master granted me his grace and imparted the truth.
I was required neither to shave my head nor grow my
hair long,
Nor pierce my ears nor smear my body with ash,
No magic, no Tantra, no pilgrimage was required,
Nor had I to bathe in the Ganges, or dig a cave,
I did not practise Asanas or Pranayama
Nor did I fast or worship any statue.

To my Guru I offer eternal thanks,
To him who freed me from worldly things,
Through him I realized the only Reality.

He also wrote about the soul, the Divine Self, truth, reality, religion and yoga. His poetry is collected in a book titled Sri Lalananda Bhajan Bodh Prakash. He wrote very elegant Hindi and Sanskrit as well. His satsangs were famous and he was called a Lakhsharthi, a wise man who has realized his goal and thus can lead others as well.

At the end of his life he united with the Supreme through his yogic power and left the world in samadhi.

[1]mahant = spiritual head of a monastery, the Christian equivalent is an abbot who is the superior of an abbey of monks

[2]There are several states of samadhi, some of which can be reached in meditation spontaneously. But these are only steps on the spiritual path and don't mean self realization. Only the highest state, the nirvikalpa samadhi, leads to turiya (highest consciousness), moksha (liberation) and God-realization. That highest state of samadhi can only be attained through the guidance and blessing of the Guru.

[3]mahamandaleshwar = head of an order, of monasteries