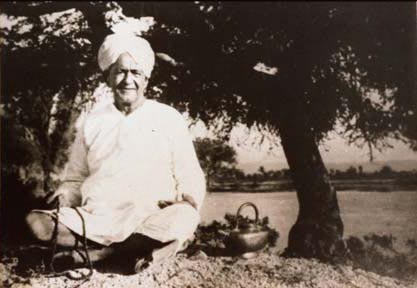 After leaving Pushkar, Mahaprabhuji did not directly return to his ashram but stayed a while just outside the village of Khatu in the Sri Deep Narayan Bagichi, where he held satsangs morning and night under the large green banyan tree.

During this time, Swami Shankar Puri arrived from Bola Guda and he was warmly welcomed by Sri Revat Singh, who was pleased at the opportunity to discuss yoga and spirituality with him. Eventually Swami Shankar Puri told Sri Revat Singh the reason for his visit, which was to invite Mahaprabhuji to the Pali District and stay at the Bola Guda Ashram.

The thakur was unhappy at the thought of being separated from Mahaprabhuji.

Swami Shankar Puri said, "You know that Gurudeva is everywhere at all times. Whenever you merely think of him, he is with you. Besides," he added, "you should not be selfish, for we also desire the blessing of his physical presence."

So Swami Shankar Puriji put his request to Mahaprabhuji, who graciously agreed.

His departure from Khatu was festive and well-organised. Some devotees from the railroad had arranged a special train for him and he travelled accompanied by an escort. The first stop of the journey was Jodhpur, where he was warmly welcomed. Devotees from Umed Palace, the residence of the maharaja, took him to the palace and with great reluctance they let him go after one week. He boarded the train and travelled to Somesar Western Railway Station, which is about 10 kilometres from Bola Guda and from there he walked to the ashram.

How the people of the villages around rejoiced at having Sri Mahaprabhuji with them, forming a great queue to see him and receive his blessing or darshan. Many swamis and yogis also came, as did four to five hundred people every day who desired to have contact. The local lord Sri Ram Singhji, provided hospitality for the many visitors. The people of Bola Guda also helped to care for the guests.

In the satsangs, Mahaprabhuji was inspired to sing many wonderful bhajans, the poetic outpourings from the depths of his soul. The nephew of Ram Singhji was a young man named Kishnan Singh, who loved Mahaprabhuji very much and sat by his side to write down his poetry. It is due to him alone that the songs from this period of Mahaprabhuji's life have been saved for us.

Representatives from the villages in the area got together and decided that if Mahaprabhuji would agree, every village should have him visit in turn, thus creating a festive procession over the whole region. 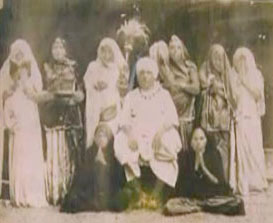 The first to approach Mahaprabhuji with their invitation were Rajput Sri Sultan Singh of Gendari and Sri Shankarlalji. Mahaprabhuji did not refuse and so with the help of Sri Sultan Singh, the people of Gendari festively decorated their village for the reception of Mahaprabhuji. All houses were newly whitewashed and the facades decorated with multicoloured flowers and paintings of elephants, birds and symbols from the holy epics. With great celebration they welcomed Mahaprabhuji by spreading carpets along the path of his entry into the village.

Day by day the people listened to Mahaprabhuji's golden teachings, such as the "sacred swan swallows pearls"[1] and almost all citizens received mantra initiation as Mahaprabhuji distributed a great wealth of blessings.

Sri Sultan Singh and his wife, Srimati Radhadevi, were deeply and humbly devoted to Mahaprabhuji. One day while he was holding satsang in their home, he turned to Srimati Radhadevi and requested her to read a poem from the bhajan book. Radhadevi folded her hands and softly spoke.

"Lord, I regret very much that I can neither read or write. The letters in this book are a great mystery to me."

"What would you do if you could read?" Mahaprabhuji asked.

"I would read all your books and bhajans!" she answered.

Mahaprabhuji handed her his Gita.

"I bless you so that from now on you may read my books. Open this book now and read aloud!"

With full confidence, Radhadevi took the book as prasad from his hands, opened it and began to read. According to her wish, from that time on Srimati Radhadevi was able to read all Mahaprabhuji's books. But only his, for the letters of others remained illegible to her.

Bhagwan Sri Deep Narayan Mahaprabhuji can give the gift of both paravidya (spiritual knowledge) and aparavidya (worldly knowledge). However, we must also pay homage to the recipient as well, for this process requires two. Without the readiness to receive, the Divine stream would come to a stop.

The seat on which Mahaprabhuji sat that day, the book through which the miracle was manifested, the whole room — all have been preserved as it was, in remembrance of that occasion which brought such joy to Srimati Radhadevi.

In the village of Shivas a devotee named Devi Singhji came to Mahaprabhuji's satsang and sat praying in Mahaprabhuji's presence. In the middle of his devotions the one great sorrow of his life returned to his mind: he had only one child. As happy children are the greatest blessing for every family, he repeatedly prayed for the extension of his family, but nothing happened. Now in silence he repeated his wish to Gurudeva.

"Don't worry," he said. "In the kingdom of Gurudeva all wishes are fulfilled. You will be blessed with two sons and one daughter."

Greatly blessed, Devi Singhji was once more to experience Mahaprabhuji's grace. His well had gone dry and he could not water his fields. Again he offered a silent prayer of help to Gurudeva and again Mahaprabhuji heard.

"The people of this world find no end to their desires," Mahaprabhuji said. "But it is a universal law that the thirsty one who comes to the water, shall have their thirst quenched. From today on you will have plenty of pure, sweet water."

And even today, at the hottest time of year when water is scarce and other wells have dried up, the well of Devi Singhji flows abundantly. He named this well Sri Deep Sagar, which means "the Ocean of Mahaprabhuji."

God fulfils all sincere wishes of his devotees. Nothing is impossible for him.

"Gurudeva, I'm afraid that the tub is too small for you and when you step inside the water will flow over."

"Don't worry, you will see that not a drop of water will be lost. The tub is big enough for me."

Mahaprabhuji then stepped into the bath, sat down and stretched. Before the astonished eyes of Sri Devi Singhji, Mahaprabhuji's body became smaller and smaller, until it was the size of a child. Speechless, the disciple stood in awe at this transformation and watched in devotion Mahaprabhuji's Lila, the Divine Play. In the form of a child he frolicked in the water and took pleasure in bathing for more than an hour. When he again stepped from the tub, his body resumed its normal size.

In respect and gratitude at being permitted to witness this miracle, Sri Devi Singhji bowed deeply before Gurudeva.

In Fulfilment of a Wish

After his stay in Jodhpur, Mahaprabhuji accepted an invitation to Keshersinghji Guda, the village of his very devout disciple, Thakur Raghunath Singh. Inspired by the pure and spiritual life of their Ruler, the citizens of this village were requesting Mahaprabhuji for his blessing and mantra initiation.

Thakur Raghunath Singh was wondering which useful gifts he could give Mahaprabhuji for his ashram when the thought of chillies came to his mind. Most Western readers have no idea how indispensable chillies are to the Indian household. Great quantities of these burning red and green pods disappear daily into Indian cooking pots!

Anyhow, this thought was troubling the thakur for in that year there had been a poor yield of chilli crops due to drought. Consequently, chillies were being sold at a very high price and he himself had not gathered even one.

"Why do you worry about the chillies?" he said with a smile. "With the blessing and presence of Gurudeva, all things are possible. Lead me to the field where you planted chillies."

Walking to the field, the thakur told Mahaprabhuji that for two years now he had gathered none. On arriving at the field they saw only withered stalks jutting from the ground. The plants had died and vermin had eaten the roots.

"Go and water the field and the chillies will grow again."

Though the thakur was unable to imagine this, he didn’t dare ignore Mahaprabhuji's instructions and so diligently watered the inanimate stalks. Behold, the next day the field began to look green and the chillies started growing in abundance. Seven days later, three quintals of chillies of the best quality were gathered from the field (one quintal = 100 kilograms).

Mahaprabhuji was asked to say something of this wonder.

"Dear brothers, the garden of Gurudeva is forever green! To keep it fresh requires only the water of love and devotion. We are all flowers in God's garden. There we blossom and grow if only we turn our hearts towards him so that we may receive his life-giving light."

Sri Raghunath Singh's eldest son, Bhanwar Singh, had been married for some years but was still childless. His mother was especially sad, for like all mothers she wished for grandchildren and accordingly decided to ask for Mahaprabhuji's help.

"Will I ever see the children of my son playing in the garden?" she asked.

"In two years a grandson will play in your home and he will have the name of Govinda Singh," Mahaprabhuji answered.

This prophecy also came true and today the family retains a deep veneration for Mahaprabhuji, as does Govinda Singh himself.

After staying with Raghunath Singhji, Mahaprabhuji proceeded to the village of Akhey-Raj-Guda, where he was invited by a farmer Sri Kala Ramji, to give satsang. This farmer was greatly devoted to Mahaprabhuji and was spiritually highly advanced.

Some days before his death he told his family and friends the day on which he would return to the kingdom of Gurudeva. He instructed them not to mourn or grieve, for he considered this a joyous event.

At the exact time stated, he left the world and the night before his farewell they celebrated a satsang. At sunrise the next morning, as usual he went to the well to take a wash and then offered a prayer to Mahaprabhuji and distributed prasad to all present.

"Dear brothers and sisters," he spoke. "If I have done any of you any wrong at any time, I beg your forgiveness. Now I will say farewell and the flame of my life will unite with Gurudeva."

With the prayer, "OM Sri Deep Narayan Mahaprabhuji Ki Jay!" he once more bowed before the picture of Mahaprabhuji at his altar and then left the body.

As had been his wish, he received the funeral of a swami.

Mahaprabhuji's disciples attained liberation irrespective of their origin. Whether swami, peasant, nobleman or beggar, each was a mukta purusha, a liberated soul.

On invitation from his devotees Puruhit Virdhi Singh, Devi Singh, Mohabbat Singh and some others, Mahaprabhuji visited the village of Ghat. It was estimated that about 200 people would gather at the satsang and it was planned that halva would be distributed as prasad. But when the message of Mahaprabhuji's arrival had spread, thousands came in order to receive his blessing. The hosts felt helpless, for how should they care for so many people?

"Don't be concerned," he said. "In the kingdom of Gurudeva there is always perfection. God cares for all. Everyone receives nourishment from him."

Full of confidence in the words of their Gurudeva, they gave out the halva that had been prepared for two hundred people and lo and behold it fed two thousand and even some was left over!

[1]There is an Indian proverb which says, "Like the Hansas gorging pearls"; hansa = swan, symbol of the soul, pearls = symbol of the Divine words of wisdom

Next Chapter: Satsang on Krishna's Birthday at Bola Guda