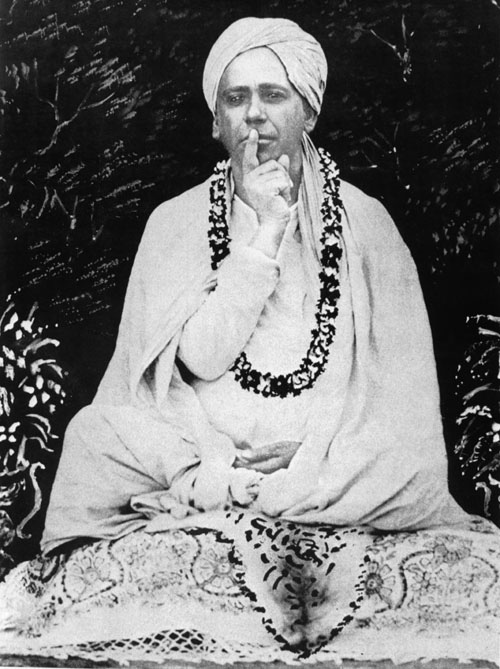 At brahma muhurta — the morning hours before dawn — the devotees came with gifts and malas made of flowers to visit Mahaprabhuji. They greeted him and each received prasad, then sat down for satsang. The whole atmosphere was filled with Divine joy as the song of bhajans and kirtans began.

During his satsangs, Mahaprabhuji would speak on various spiritual subjects and the topics this day was "Mauna Satsang" — a satsang without words. In mauna satsang all participants silently direct their questions and desires to Gurudeva and after some time receive an answer, also in thought form.

All looked at Mahaprabhuji and he gazed them with eyes full of love and kindness, deeply touching their hearts. Then with a gentle smile he raised the index finger of his right hand to touch his lips. Everyone sat in complete peace and silence, immersed in his ocean of nectar.

The Omnipresent filled the depths of each soul with Divine love and after a time the people felt Gurudeva's message deep inside them:

"Atma and paramatma[2] are One. Human dharma is One. Brahman is One. One day all that exists will again dissolve in Brahman. Everything has its origin in this One and will eventually reunite there. The source of All-Being that maintains this universe is only this One. This One is perfect and immortal. There is only one Truth — the different paths which originate from this source will again lead back to it."

After this message each person in the satsang received a special message of his or her own.

The politicians heard Mahaprabhuji's warning: "Don't forget your duty while under the influence of power associated with your job. Honour the king and love all people. The public always follows the example set by the famous. If politicians fulfil their dharma, the people will also."

The rich heard Gurudeva's message as such: "Money isn't everything. Don't allow maya to fool you. Your possessions will stay here when you leave this world. Good karma is the only wealth that will accompany you at the hour of your death. If you serve the poor and others with your money, you also serve God."

The physically strong heard: "To have strength is a gift from God, therefore protect all living beings, don't harm them. Use your strength to defend the Truth. If you don't do this, what is the use of strength?"

Deep within, the yogis felt: "Yoga is the reunion of the individual self with the Divine Self. If you practise yoga with a strong mind your success will be assured."

The Vedic scientists understood Mahaprabhuji like this: "God is the only truth. The world is illusion, unreal, binding you and making you suffer."

The devotees of Gayatri heard: "The Gayatri Mantra is the mahamantra. Gayatri gives you the siddhi to fulfil all wishes in this world and others. But take care to learn the correct technique of Gayatri-service from a Satguru, otherwise success will not come."

The devotees of Shakti received this message from Mahaprabhuji: "The goddess is Mahamaya. She can give you earthly pleasure but not liberation. Liberation is only achieved through the Satguru."

The devotees of a personal God in human form and the devotees of the formless Brahman were told: "I am both sarguna and nirguna. Nothing else exists but me."

The Prarthana Samajis heard: "Prayer is the essence of religion and nourishment for the soul. It helps in the battle against ego, the strongest enemy of the spiritual aspirant."

For the Christians, this was Gurudeva's message: "The message of Jesus Christ is true. The path of service and forgiveness is your deliverance and liberation. Follow his example."

The Sikhs heard within: "Guru Nanak was a Divine incarnation. The ship of his name will carry you across the ocean of this world. Always chant his name."

The Muslims heard: "Allah is God. He alone exists in the many names and forms. He alone lives in the hearts of all beings. Therefore harm no-one, never cause pain to any being and pray to the Lord."

The Parsi received Mahaprabhuji's message in this way: "Honour of fire means honour of all forms. Fire burns everything. Fire by its very nature transforms everything into fire. In the same way, Gurudeva burns the ignorance of the disciple in the fire of self knowledge."

To the Buddhists, Mahaprabhuji spoke: "Keep to the rules of Buddhism and be true followers of Buddha. That is your liberation."

The brahmins heard him say: "Fulfil your duty to Brahman and you will be real brahmins. Only one who knows Brahman is a brahmin."

The kshatriyas[3] heard Gurudeva: "It is your highest duty to protect all living creatures. To kill innocent people and animals is a violation of dharma. Who so interferes with dharma loses everything."

The vaishyas[4] heard Mahaprabhuji's words: "Realize your duty and serve the people. Don't be greedy and don't harm others out of selfishness. By deceiving others you betray your Self."

The sudras[5] were told: "To serve and to help is the highest dharma, therefore serve everyone with love. But don't think you are less important. You are not beneath others but equal to everyone."

The women heard Mahaprabhuji: "You are the bricks of the wall. You are Lakshmi, the goddess of prosperity. You gave life to Saints, kings, scientists and brave men. You are the strongest power in the world, as you alone are bearing all living beings."

The students heard him say: "Strive for a good education with devotion and constant effort. Serve the people with your knowledge. Science makes people important in this world, therefore always be prepared to learn more. Only those who have learned something are honoured in this world."

And all of them received the message of Mahaprabhuji's Golden Wisdom:

In this way, everybody received Mahaprabhuji's message according to their own belief and devotion. After some time, Maha­prabhuji removed his finger from his lips.

"The thought that each of you now hold in your mind, is right," he said with a gentle smile. "I am in you and you are in me. Meditate on your Guru, pray and chant his name with devotion. Search for spiritual knowledge and your spiritual goal. Follow the words of the Guru."

"I am that Truth, Knowledge and Wisdom,
the perfect Satguru, the Conscious
Brahman, the everlasting Light."

The Satguru makes the nectar of wisdom flow,
Like God Indra, he makes it rain.
He doesn't discriminate between high and low,
He treats the king and poor alike,
He takes away the three obstacles[6].
Free, without desire or any kind of fear,
He rests happy within himself.

He is the liberator, beyond all duality,
His grace is unchangeable,
He is the creator, the everlasting, the Omnipotent,
Even Shiva meditates on him and serves him,
He is immovable like the Meru mountain,
Perfect and without change,
Practising inner and outer renunciation,
He is the liberator who destroys the ties of karma
For the deliverance of souls,
The incarnation of bliss come on earth.

Sri Deep says, I bow my head in deep devotion
Before my Gurudeva.

He continued: "In the external universe the sun gives warmth and light to the planets. There is only one sun, visible to everyone, shining for all living creatures. In the same way I, the everlasting, conscious Light, illuminate Wisdom and the perfect Light of Brahman, of the whole creation, inside and out. I shine in all things movable and immovable, in the sun, moon and stars, in Brahma, Vishnu, Shiva and the Saints. I shine in the Divine incarnations, in the rishis and all other manifestations of God as the Omnipotent and only power of life.

"I was at the beginning and there was nothing but me. And I will be forever, without another beside me. All this, My ancient Vedas tell."

As Mahaprabhuji spoke, all listened with fixed attention, for in his voice was the power of the unifying Divine Love that touches all hearts. The listeners felt free from earthly worries, cares and fears and experienced the inner joy of the soul. Hindus, Muslims, Sikhs, Christians, Buddhists, Jains and Parsi, all treated him in the same way, as their Divine Master.

They would speak of Mahaprabhuji like this: "Mahaprabhuji has explained to us the essence of our religion in such a clear, understandable way, it is as if he himself had established it. He is a remarkable Saint for he only wishes the best for all people regardless of their religion. He is the symbol of goodness, wellbeing and development of humans. He is truly Gurudeva, the Ocean of Nectar. In his presence all pain, doubts and worries disappear."

When the satsang was over, all felt rich with the gift of Divine wisdom and blessing. All hearts were filled with gratitude towards Mahaprabhuji, for it was through his mercy that they had gained clarity, light and inspiration for their religious path.

Next Chapter: Meetings with Mahashakti